Be the first to review
Write a review

An Audience With Jonah Lomu at The Deco Theatre, 12 September (Up to 38% Off) 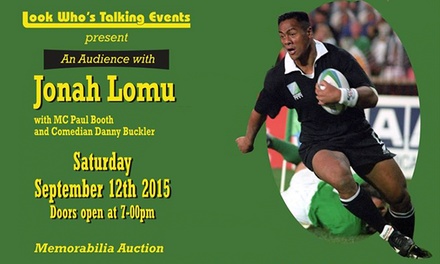 An Audience With Jonah Lomu

Rugby fans will have a chance to meet the legendary All Black player, Jonah Lomu up close in person during this ‘An Audience With’ event. Winning three Hong Kong Sevens trophies and scoring seven tries at the 1995 Rugby World Cup in South Africa, Jonah Lomu became a real rugby icon. He won for New Zealand in 1995 and 1996, brought home a gold medal from the 1998 Commonwealth Games and later led his country to the first Rugby World Cup Sevens victory in Argentina. The audiences will listen to Lomu’s life and career stories and will be given the chance to take pictures with him. Two hours of free parking will be available for the duration of the event.

Designed by the house-architect WR Glen and built on the site of the original Technical College, The Deco features a long-lasting history as a cinema and a concert venue hosting an array of well-known bands. Today, The Deco Theatre is a recognised Northampton’s premier venue which may be hired for theatrical productions, wedding receptions, and other social events.

Validity: Valid 12 Sep 2015.
Purchase: Limit 1 per 1, 2 or 4 ( minimum 1 adult per group) people. May buy 9 additional as gifts.
Booking: Required by phone 01604622749. Present printed Groupon to the box office on arrival. 24-hour cancellation policy.
Restrictions: Show commences 7.45pm. Must arrive at least 30 minutes before performance. Under 18s must be accompanied by an adult. Smoking is not permitted in or around the premises.
Original values: Verified using our merchant's website on 26 Aug 2015.